Fiona needed a logo to represent her wholesale online shop and website. She engaged two designers through an online company which yielded unsatifactory results. The images didn’t quite represent the business and more importantly, they were very well used cliparts that were put together. They were not one of a kind or original.

Cuddle Me Baby website project started and while in the process of it, Fiona felt increasingly uneasy about her logo. So she asked for my honest opinion. The colours and lack of originality aside, the image conveyed a rather negative feeling which was most unwelcomed to be associated with babies and baby products.

So, where to begin to create a logo that conveys ‘cuddle’ and ‘baby’ as well as cuteness and be endearing? It started with several pencil on paper doodlings and sketchings – both using drawings of a baby figure and using the letters CMB. This is one of many: 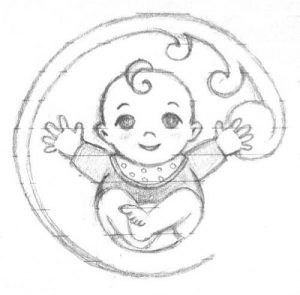 Big pleading, endearing eyes that say ‘love me’.  Outstretched arms that say ‘pick me up, cuddle me’ and folded legs typical of newborn babys in fetal position; warm and safe in ‘mummy’s tummy’.

The baby koru/fern surrounds the baby, hinting the country of origin, New Zealand.  Everything is circular in shape – eggy and baby-ish.

While all the elements were all there, the baby didn’t look quite right.  The big, bald head with a curl looked rather disturbing.  Back to the drawing board! 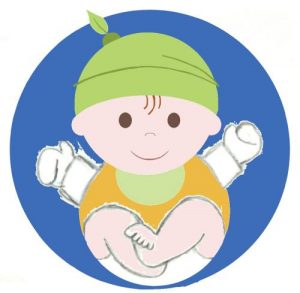 I tried to simplify the pencil sketch, put a beanie on the baby’s head with a leaf to signify many of the organic products offered by Cuddle Me Baby. I’m much happier with the baby. The sketch was scanned and digitally coloured. Orangy-yellow and green colours for gender neutrality.

This unfinished work was shown to Fiona just to make sure I was on the right track. Fiona loved the baby but not the mustardy yellow and she’d like to have a fern somewhere. 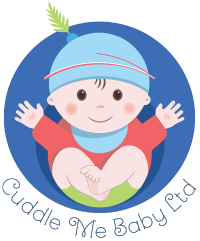 Knowing I was on the right track, work started from a clean sheet, so to speak. This time, it was all done on my graphic software, no more pencil sketching.

The baby now wears the colours that were chosen by Fiona and used on the rejected graphic work. Both genders are pretty well included. The leaf on the beanie turned into a koru and bare hands instead of mittens. Finishing touches were added to the eyes with pupils and sparkles, and some shading to give some depth and dimension.

For the creation of the image slider on the website, I replicate the business card Fiona made. I had to create a rainbow! What is the right way? I don’t know. I just did it my way : 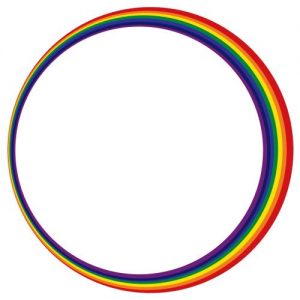 For the slide background, I created green, rolling hills and put the rainhow over it and a cloud. The slider shows off the products.

This site uses Akismet to reduce spam. Learn how your comment data is processed.